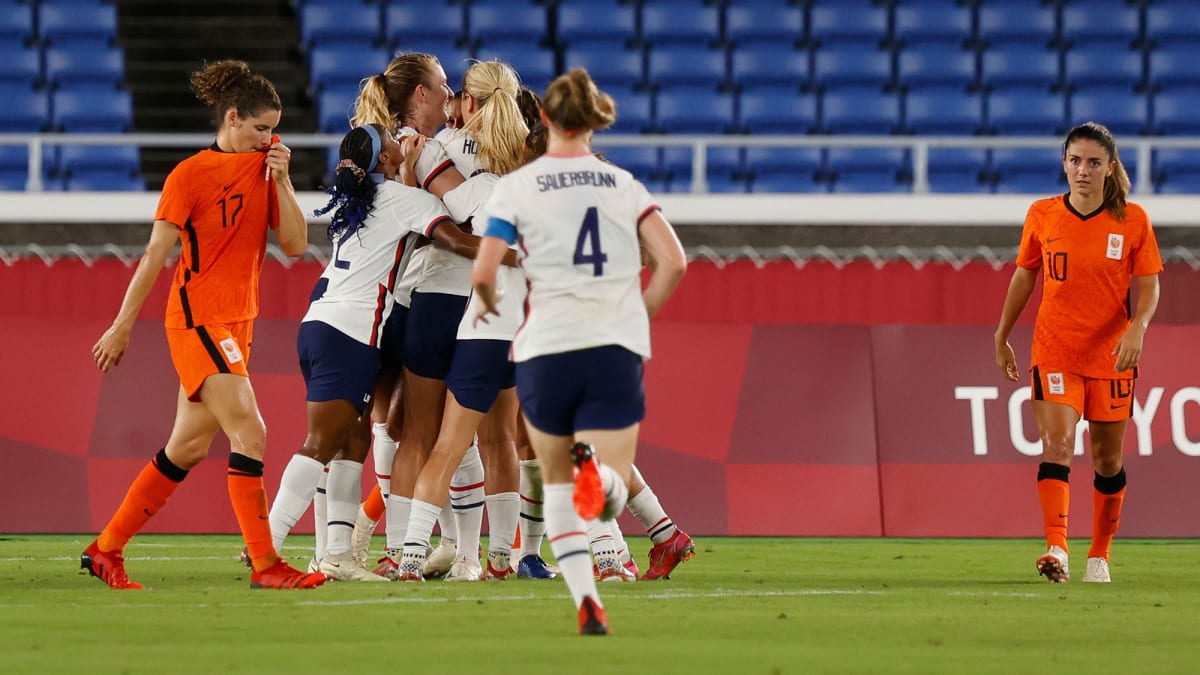 The United States women’s national team is playing for her life in the Olympics, opening the knockout stage with a rematch of the 2019 Women’s World Cup final against the Netherlands.

The quarter-finals in Yokohama, Japan come on the heels of an unusual group stage for the United States, who finished second to Sweden in the group and saw their 44-game streak finish unbeaten. Despite a brilliant start on Friday, the US was forced to play from behind, but it appears to have found its mojo again.

Vivianne Miedema added ninth and tenth goals of the competition to her Olympic record in a match that is 2-2 in the second half. He opened the scoring for the Dutch on 18 minutes, only for Sam Mewis who equalized 10 minutes later and Lynn Williams’ surprise appetizer gave the United States the lead three minutes later. Miedema’s first goal came against the game run, with the United States enjoying a brilliant opening quarter of an hour with a lineup full of surprises.

Alex Morgan, Megan Rapinoe, Christen Press and Rose Lavelle have all been confined to the bench, with Williams, an alternate only on the full list due to the IOC’s expansion of 18 to 22 player teams, Carli Lloyd and Tobin Heath starting in attack and Lavelle, who has scored in each of the last two US games against Holland, is being looked on in favor of Lindsey Horan and Mewis in midfield.

However, Vlatko Andonovski’s changes seem to be paying off early on. The US pressed well and was at the forefront. Heath was disallowed for an offside goal in the tenth minute, the sixth time that a US goal has been cleared from the offside flag in this tournament. Four minutes later, Horan received a header blocked off the post by Dutch goalkeeper Sari van Veenendaal, but it was clear that the United States was enjoying the early momentum.

This changed four minutes later. Danielle van de Donk’s shot from the edge of the US box was blocked, and it fell to Miedema, who had just smelled the action but was aggressive to be first on the loose ball and then clinical enough to beat Alyssa Naeher with she shot.

Then, three minutes later, the roles reversed, with Williams firing home from the center of the area on an assist from Mewis, who simply kept the US attack alive by winning a Dutch boxed header afterwards. a corner kick.

The Dutch regrouped after the interval and found an answer in the 54th minute through a familiar source. Miedema, once again, provided the answer, beating Naeher with a low shot from distance and slipping him into the post for the 2-2.

The goal triggered a triple change from Andonovski, with Morgan, Press and Lavelle all on the pitch to replace Williams, Mewis and Lloyd. Press appeared to put the United States ahead in the 58th minute, shooting home at the far post after a cross from Horan, but the goal was taken off the scoreboard via an offside call – the seventh case for the United States in this competition – despite a lengthy revision of the VAR.

The winner will advance to the semi-finals to face Canada, who overcame Brazil on penalties after 0-0.

More coverage for the Olympics: